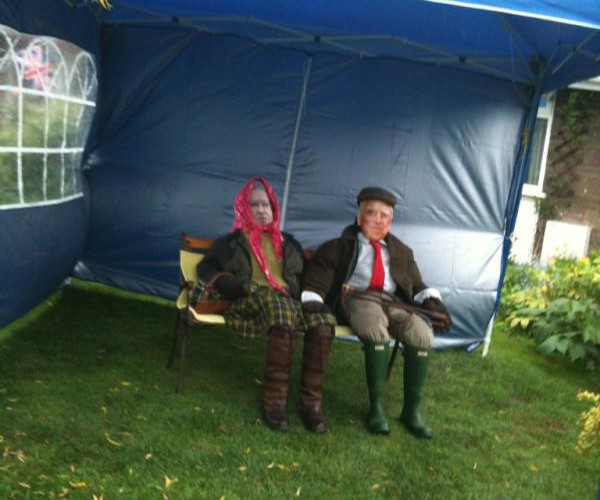 Despite the continuous rain, the villagers of Appleton Thorn were not put off their planned celebrations to mark HM The Queen’s Diamond Jubilee.

Residents of Parkland Close had a couple of very special visitors – who looked to be well stuffed by the time these photos were taken.

At the Appleton Thorn Village Hall, the Jubilee Family BBQ was well attended.

The Vilage Hall’s gazebos protecting the (mainly male!) BBQ chefs from the worst of the rain, whilst diners ate at tables in the main hall. A range of salads, bread and sauces was provided to compliment the burgers, sausages, steak, fish, kebabs, etc brought by the families

Younger family members made good use of the dying BBQ embers to toast marshmallows.

The Jubilee River Pageant was shown throughout the day and when The Queen was spotted jigging along to the Hornpipe, the whole crowd in the Village Hall joined in with table thumping then went into a rousing rendition of Rule Britannia – just like Last Night at the Proms!

Everyone got to their feet to sing the National Anthem at the end of the event – so loud that they could possibly have heard it down in London.

A range of Jubilee themed real ale was put on by Alison, Derek and Kris.  The appreciative drinkers did there best to make sure that at least a couple of beers, such as  “Golden Jubilee”, sold out before the Sunday evening shift arrived.