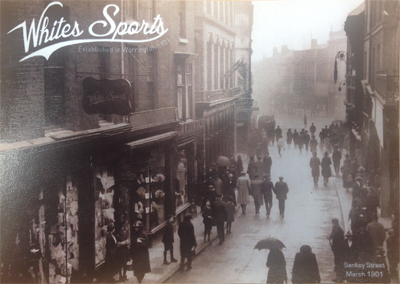 Whites Sports Shop, known to many for its long presence in Warrington Market is inviting customers old and new to join them on Saturday 15th March, between 12pm and 2pm in celebration of their 113 years in Warrington.

Wire mascot Wolfie and some other Warrington Wolves stars will be there – so why not come along and challenge them to a game of darts and while there take a look at the ‘Whites 1901 heritage display‘.

Susan who owns the shop, together with her late husband Paul, have been members of the Appleton Thorn village community for many years and indeed Paul was long-term licensee of the Village Hall from when it was first established back in the early 1980s.

Sadly Susan will be saying goodbye to Whites Sports Shop as she plans to retire in a couple of months. However, the shop will continue to be found online at whitessports.com.