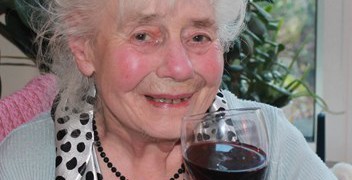 Alice will be fondly remembered by many in Appleton Thorn. She steadfastly maintained her independence up until quite recently and was a regular at both the Thorn Inn and Village Hall.

She knew, and was well known by, many of the younger residents as she often got off the bus back from school with them, generally with at least two bags, having been “down to the shops”. Those who helped her with her bags always remarked how heavy they were. Those of us who were privileged to have known Alice knew that she was not a woman to let anything stop her.

Alice was always appreciative. Younger helpers had sweets or chocolate pushed into their hands; adults who had walked her home, or given her a lift down Pepper St., would often be offered a ‘small’ whisky!

Sadly Alice left us at the beginning of December. She passed away peacefully – at the age of 88. She had not been well in recent months, but had been a welcome visitor to the Village Hall, with her daughter and son-in-law, only recently.

Alice’s funeral will be held at 11:30am on Friday 18th December at St Cross Church, with a short service at Walton Lea Crematorium at 12:20pm.

A celebration of Alice’s life will follow at Appleton Thorn Village Hall.

All who knew Alice are welcome to attend, but her family ask that it is “family flowers only”. Those wishing to mark their remembrance of Alice are asked to make donations to Alice’s Memorial Fund at DementiaUK.org .