The referendum on the Appleton Thorn Neighbourhood Development Plan (NDP) has overwhelmingly voted in favour of its adoption. The count was held shortly after the close of the poll at 10pm, in the Appleton Thorn Village Hall. Out of a total eligible voting population of 1,021, those voting “Yes” totalled […] 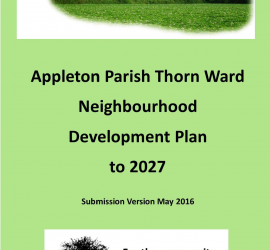